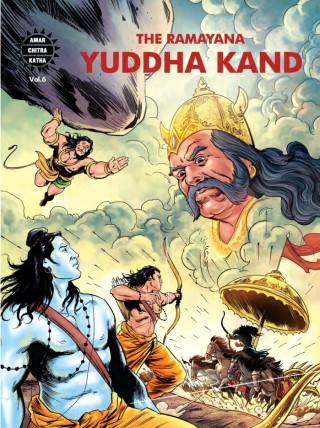 Hanuman comes back to Rama with Sita’s choodamani and a message from her asking Rama to make haste and rescue her. Rama and Lakshmana set out immediately with Sugriva and a mammoth army of vanaras and bears. Crossing the ocean they arrive at Ravana’s golden city of Lanka Both sides prepare for war and the stage is set for a terrible conflict which even the gods and sages are watching. Both armies are equipped with the best of generals and warriors and the result is a war that is fought on many levels with each side losing thousands of its best soldiers Rama and Lakshmana are skilled in warfare and have been blessed by the sages with many divine weapons. Ravana, who is a celebrated scholar, a devotee of Shiva and a courageous warrior, is surrounded by his valiant sons and brothers. But he has two fatal flaws – those of arrogance and lust As the war progresses, Valmiki paints for us one of the grandest ‘epicscapes’ in world literature.