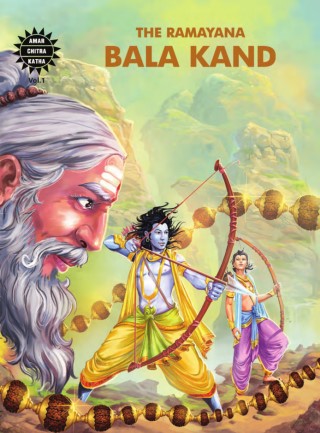 Bala Kand, the first book of the Ramayana, is

about Rama’s boyhood. It begins by relating how Valmiki composed

and launched his great poem. In this book, we meet King

Dasharatha of Ayodhya and his queens, Kausalya, Sumitra and

Kaikeyi. In time, four glorious sons are born to them – Rama, Bharata,

Lakshmana and Shatrughna. Devoted to each other, the four

princes grow up happily in the palace. But the gods have destined

Rama to be a hero. His thrilling adventures begin when Rishi Vishwamitra

comes to Ayodhya to seek his help against the rakshasas

who are harassing the rishis in the forest. Accompanied by Lakshmana,

the young prince goes to the forest to fight the evil

rakshasas. Under the tutelage of the great rishi, Rama and Lakshmana

learn the duties of a Kshatriya, and the secret mantras of all

kinds of weapons. As they travel with the rishis, they also hear

many fascinating tales about the people and places they see. At last

they come to the palace of Mithila to see the great bow of Shiva.

Here they meet King Janaka, who has promised his daughter’s

hand to the strongest prince in the land…