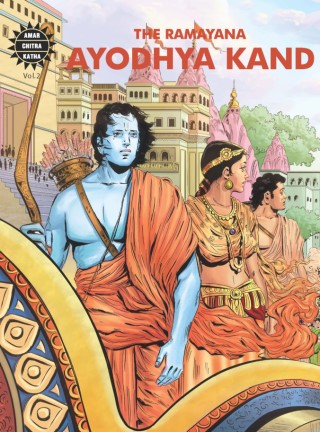 Ayodhya Kand is the second book in Valmiki's Ramayana. It tells the story of Lord Rama's exile from Ayodhya and the grief that grips, not just his family, but the entire city. In the first part of this book, Ayodhya Kand I, we find out how and why King Dasharatha is forced by Queen Kaikeyi to banish his son Rama. Even though the people condemn her for her cruelty and the broken-hearted king tries to appeal to her better sense, Kaikeyi is unmoved. Determined to protect his father's honour, Rama accepts the harsh decision and prepares to leave. He is joined by Sita and Lakshmana, who decide to follow him during his exile. We trace the beginning of their journey from Ayodhya, even as the people of the city sink into despair. Ayodhya Kand I continues Valmiki’s story from the first book in the series, Bala Kand, which tells us of Rama’s childhood. It will be followed by Ayodhya Kand II