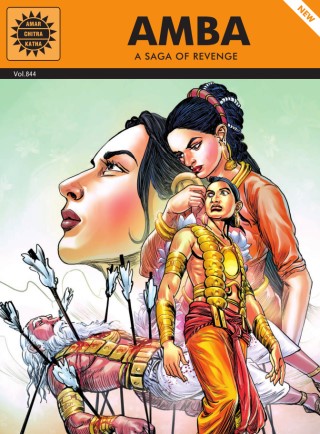 Amba, the eldest of the three princesses of Kashi has decided that she will marry Shalva, the king of Saubha. Things take an unexpected turn when Bheeshma disrupts the swayamvar and kidnaps the three princesses for his brother, Vichi-travirya, the ruler of Hastinapur. Amba vows to avenge the insult meted out to her. She appeals to several kings and princes to help her destroy Bheeshma but they all refuse as he is too powerful an adversary to challenge. Disappointed and filled with rage, Amba decides to take revenge herself and prays to Shiva to guide her. Amar Chitra Katha tells the compelling story of one who played a crucial role in the final outcome of the epic battle of Kurukshetra.


over 1 years ago
RAJENDRA PRASAD commented on Amba from Amba: Actually I am feeling pity on both of the because Bhishma had taken a great vow and couldn't break it and Amba had to live her life without getting married..........
over 2 years ago