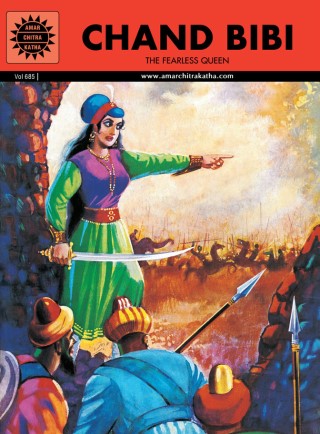 The story of Chand Bibi is imprinted on the Indian mind as an example of all that is noble and brave in the human spirit. Around the year 1595, the Deccan was divided into many kingdoms. One of these, the historic kingdom of Ahmednagar, was rife with petty quarrels, jealousies and power struggles. Burhan-ul-Mulk, its ruler, having gained the throne with the aid of Akbar, spurned that great Mughal king and asserted his independence. Burhan was too engrossed in his personal pleasures to make a good ruler. When he died, he left behind a weak and divided kingdom. Into this turbulent scene entered a woman who was to make a sharp impact on history. The woman was Chand Bibi, Burhan-ul-Mulk's sister. She had been married to Ali Adil Shah of Bijapur. After her husband's death, being childless, she returned to Ahmednagar to train her nephew Prince Bahadur, in the ways of kingship. With the untimely death of her brother, she chose to take the reins of government into her own hands on behalf of Prince Bahadur and showed herself more than equal to the task.