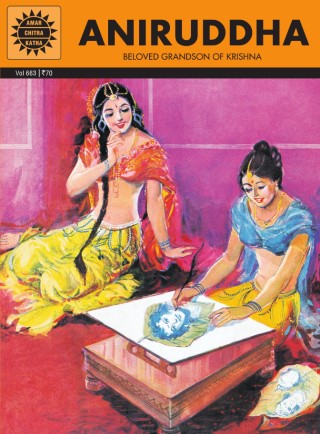 Usha was the daughter of demon-king Bana with a thousand heads, unconquerable by anyone not equal to Shiva. Usha saw an unknown, handsome young hero in her dream and fell in love with him. She opened her heart to her companion Chitralekha ('maker of pictures') but could not name the man. Chitralekha made drawings of the well-known princes from which Usha identified her sweetheart. He turned out to be Aniruddha, grandson of Krishna. Chitralekha landed in Krishna's palace at night and brought sleeping Aniruddha to Usha's quarters. Loved by and secretly married to Usha, he stayed on. Having known Aniruddha's whereabouts, Krishna and his army invaded Bana's capital and carried away the couple.

Saanvi rated on Aniruddha from Aniruddha