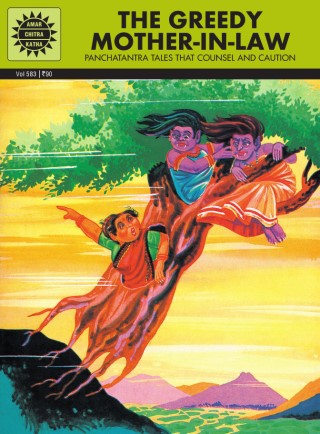 The Greedy Mother In Law

Saumitri's mother-in-law is a tyrant and a greedy one too. So when Saumitri discovers the pure gold sands of Suvarna Dweep, her mother-in-law decides to go there at once. In another story a pretentious owl tries to match the status of his friend the king of swans and oversteps the boundaries of caution. The Panchatantra, though originally written by Pandit Vishnu Sharma, was reworked by successive writers. The stories in this Amar Chitra Katha are taken from the Kannada translation, of Vasubhaga Datta's version by Durgasimha, a minister at the court of the Chalukya king, Jayasimha.