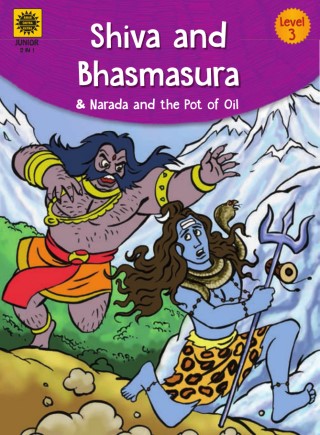 Shiva and Bhasmasura and Narada and the Pot of Oil

Virkasura prays to Lord Shiva and gains the power to turn anyone into ash, if he places his hand on their heads. He is now called Bhasmasura. Then, Bhasmasura decides to test the boon by placing it on Shiva's own head! How does the kind-hearted god save himself?

Narada believes that he is the greatest follower of Vishnu but Vishnu tells him that his greatest follower is a simple farmer. Narada does not believe him, so Vishnu gives him a task to teach him a lesson. What is the task and does Narada learn his lesson?